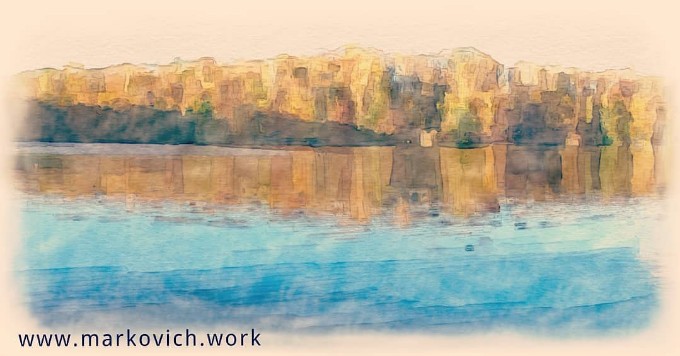 For eleven years we stood side by side, drifting on the surface of a mirror lake.

Eyes cast down, we mistook our reflections for reality.

And as we drifted toward the approaching falls, the surface remained smooth, unbroken, for we drifted imperceptibly.

In and out of silent coves, we failed to register the shifting shores.

And then there was one more who joined us. And another. Two new reflections appeared and we both tilted our heads.

And as seen from without, as by an observer to the unfolding plot – fate, say – there would be no doubt: they apprehended the reality of those new souls, and it filled them both with joy, real and undiluted.

Eyes fixed on our children, or cast down on unbroken reflections, we failed to register the shifting shores.

And then, as seen by fate, they picked up speed. Unaware. Minutes dripped into days and days into months, and then the years, passing without break, without mercy, without warning.

So it was. The slow drifting became a swift advance, and we, mere passengers on a rudderless raft, convinced we had control, trusting our deceiving eyes and the distending reflections being swept swiftly along.

Hand in my hand, her arm began, is if made of rubber bands, to stretch, pulling with an unseen power away from me.

Her body, elongated horizontal, being sucked into the nearing vortex.

And now, her arm is so long. The fingers intertwined with mine growing ever thinner, narrowing to nothingness, approaching the horizon of no return, sucked, pulled unknowingly, terribly into the gathering torrent of the approaching falls.

And still that distending reflection was all we knew of each other. And it made sense.

And now her body a distant point. Distended from my perspective as to be unrecognizable. I see the shifting shores, fleeting now to blur, too late my desperate lunge, pitiful attempt at self-preservation. I plunge over the falls.

Now nothing but air and water, air and rocks, in a tumbling kaleidoscope of chaos.

And looked at from without, by fate, mother and father extending wings soft and strong. Wings not meant to fly, for nothing can rescue them from this plunge. But wings to protect, to shelter, the only real thing left, knowable. An act of pure instinct and love. Wings unfurled and then immediately furled, wrapping soft protection, cocooning the children.

Coming up. Gasping. My hands palms upward break the water’s surface. Between my fingers, a memory. The reflections on the water scattered continuously in bursts of churning bubbles, sparkling light.

Through the thin wings enwrapping, the children see and sense, yet cannot comprehend this different world.

And I, desperate to find my bearings, head bobbing, eyes no longer cast downward, but seeing as if for the first time. Wings wrapped protectively, I search timidly.

And here, on distant, barely perceptible shores, rising and falling as I bob in place, her body rematerializes from the ether, organized web of light.

Seen from without, he looks at her. Eyes no longer cast downward. He looks at her. And for once he sees her, but fails to discern the direction of her gaze.